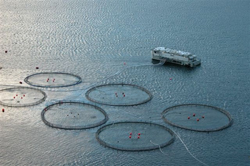 Aquaculture, also known as fish or shellfish farming, refers to the breeding, rearing, and harvesting of plants and animals in all types of water environments including ponds, rivers, lakes, and the ocean. Researchers and aquaculture producers are "farming" a variety of freshwater and marine species of fish, shellfish, and plants.

Rapid population growth and an increased awareness of health benefits associated with seafood is projected to increase the global demand for seafood 24%. The aquaculture industry will be required to fill the supply gap with an additional 20-30 million tons of seafood.

Consistency in temperature and oxygen levels provides a health­ier envi­ron­ment that leads to increased size, increased sur­vival rate and thus increased profit to the aqua­cul­tur­ist.

Since species like shrimp are bot­tom dwellers, it is also crit­i­cal to have the oxy­gen dis­trib­uted to the bot­tom layer of the pond where these species live and thrive. Also, thor­ough mix­ing and dis­tri­b­u­tion of oxy­gen aids in the con­trol of ani­mal and feed wastes, keep­ing pond bot­toms cleaner and decreas­ing risks of dis­ease.

How does Aquaculture Work?

The methods of aquaculture’s farm-to-table process can differ vastly, from species to species. Generally speaking, there are four (4) stages of the production chain, starting in hatcheries and ending at the seafood counter in your grocery store.

Each of these stages can vary with respect to its effect on the environment and the quality and safety of the seafood they produce, which is why the Global Aquaculture Alliance administers the Best Aquaculture Practices (BAP) third-party certification program. In the past, fish farms have had issues with respect to these four aspects of aquaculture, and BAP seeks to improve the fish farming industry across the globe. This is the only certification program that covers every step of the supply chain. You can be sure your seafood was farmed responsibly if it has the BAP logo on it!

The four (4) stages of the Aquaculture Production Chain are as follows:

The first stage in the aquaculture production chain is the hatchery. This is where the breeding of fish, hatching of the eggs and rearing of fish through the early life stages happens.

Once the animals are mature enough, they are transferred to the farm, where they are grown to harvest size, using feed produced at feed mills (another stage of aquaculture). The fish are then transported to a processing facility, where they are packaged and sent to food retailers and grocery stores.

It is during the farming stage where our blowers are seen and used most often, where there is a constant demand to introduce air (or oxygen) to the water.

TMC Fluid Systems supplies the Aquaculture industry with Aqua Series Blowers that are specially designed and configured for use here.

The following is a good visualization of a Blower System used specifically in the aquaculture and fish-farming industries for re-oxygenation.