Foresight, a fund manager that invests in renewable energy, yesterday announced its latest project: a £4 million ($5.9 million) new plant on a farm near Durham in northeast England. The technology? Anaerobic digestion, one of a raft of alternative energy systems becoming increasingly prevalent in Europe.

In energy investment terms, Foresight's project, and two similar farm-based plants last year, are small—especially when compared to giant projects planned in the UK, including a new nuclear plant called Hinkely Point that's projected to cost over £24 billion. Power production from the Durham anaerobic plant will also be modest: 3,400 Megawatt hours per year, or enough for 800 homes.

But endeavors like this may well be the way forward, as countries try to convert to less-polluting energy than fossil fuels. Investment in huge, centralized coal and gas plants pumping out power for large areas is waning. In their place, hundreds of smaller plants generating power in diverse ways are springing up, and feeding into the national grid. They're tiny, on a national scale. But they are multiplying.

The UK government and the Green Investment Bank that it set up to effect a transition to a more renewable-based system both say that small projects and diverse technologies are the way forward. Extracting tiny amounts of heat from rivers and seas is another technology on the rise. In Wales, a billion-pound experiment is using the tides to power homes. In 2014, renewables made up 20% of UK electricity production.

Anaerobic digestion is a process in which micro-organisms break down organic matter, producing a "biogas" in the process. The gas—a mix of carbon dioxide and methane—can be fed directly into the grid. It can also be used in vehicles and other engines. Human food waste, the leftovers from growing crops, and manure from animals can all be used to feed the micro-organisms—offering a productive way to deal with food and agricultural waste. As well as biogas, the plants produce a waste product that can be used as fertilizer.

While anaerobic digestion still produces only 0.3% of the UK's energy, it's on the increase. Anaerobic digestion is the fastest-growing renewable technology in the UK after solar, though both started from a low base just a few years ago. 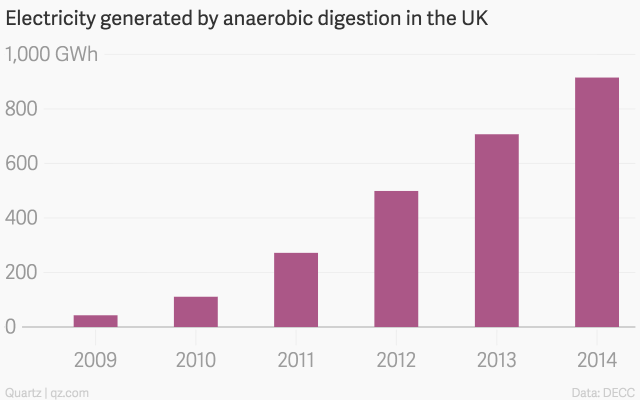 AD, as it's also known, was one of ten technologies profiled by the Green Investment Bank in a March 25 report on making UK cities more efficient. The report concentrated on technologies with lower profiles than solar panels or wind turbines, and also included energy from waste, LED streetlamps and low carbon public transport. Despite being lesser-known, all ten are "tried and tested and available to be deployed, at scale, right across the UK, straight away," wrote Shaun Kingsbury, Green Investment Bank CEO, in the report. Combined, they represented an investment opportunity of more than £25 billion ($37 billion) over the next five years, he said.

Quietly, the map is filling with small plants. A list of anaerobic digestion facilities in the UK already runs to almost 200. That's a lot of micro-organisms chomping through a lot of potato peel.