Explosive atmospheres in the workplace can be caused by flammable gases, mists or vapors or by combustible dusts. Explosions can cause loss of life and serious injuries as well as significant damage.

Explosive atmospheres can be caused by flammable gases, mists or vapors or by combustible dusts. If there is enough of the substance, mixed with air, then all it needs is a source of ignition to cause an explosion. Explosions can cause loss of life and serious injuries as well as significant damage.

There are two primary ways of reducing the risk of an explosion:

Selection and use of the correct equipment can help greatly in preventing explosions.

What Is An Explosive Atmosphere?

An explosive atmosphere is defined as a mixture of dangerous substances with air, under atmospheric conditions, in the form of gases, vapors, mist or dust in which, after ignition has occurred, combustion spreads to the entire unburned mixture.

Where Are Explosive Atmospheres Found?

Many workplaces may contain, or have activities that produce, explosive or potentially explosive atmospheres. Examples include places where work activities create or release flammable gases or vapors, such as vehicle paint spraying, or in workplaces handling fine organic dusts such as grain flour or wood.

ATEX is the name commonly given to the two European Directives for controlling explosive atmospheres:

How Should Explosive Atmosphere Zones Be Divided?

The ATEX directive distinguishes between two types of explosive atmospheres: (1) Gas, and (2) Dust.

Areas within these two kinds of explosive atmospheres are each divided into three sub-zones.

Although the zones characteristics are identical for both gas and dust, their numbering is different. Zone 0, 1 and 2 refer to gas. Zone 20, 21 and 22 refer to dust.

Zone 2 / 22: Minor Danger
Presence of explosive gasses or combustible dust is not likely to occur or only for a shorter period of time.

All flammable gasses, vapours and mists require to be mixed with oxygen to make them burn. There is about 20% to 21% of oxygen in the air we breathe. Mixtures of a flammable gas and certain percentages of air will burn if ignited.

Too much or too little oxygen, the mixture will not ignite. The upper and lower concentrations of gas in atmospheric air, by volume, are known as their flammability or explosive limit.

This is the concentration of flammable gas or vapor in the air below which the gas atmosphere is not explosive.

This is the concentration of flammable gas or vapor in the air above which the gas atmosphere is not explosive.

At a critical concentration called the most easily ignited concentration (MEIC), the amount of energy required to cause ignition is minimal.

The critical energy at the MEIC is called minimum ignition energy (MIE).

The Effect of Temperature

If the temperature of a mixture is raised, the amount of electrical energy required for ignition will decrease, reaching zero at the AIT.

An Explanation of ATEX, NEC and IEC Systems

Apparatus is divided into Equipment groups:

• Group I for mines susceptible to methane (firedamp).
• Group II for explosive gases for locations other than mines
• Group III for dusts

*Example of an American certification would be:

Note: The majority of Areas Classified in North America are according to Class and Division 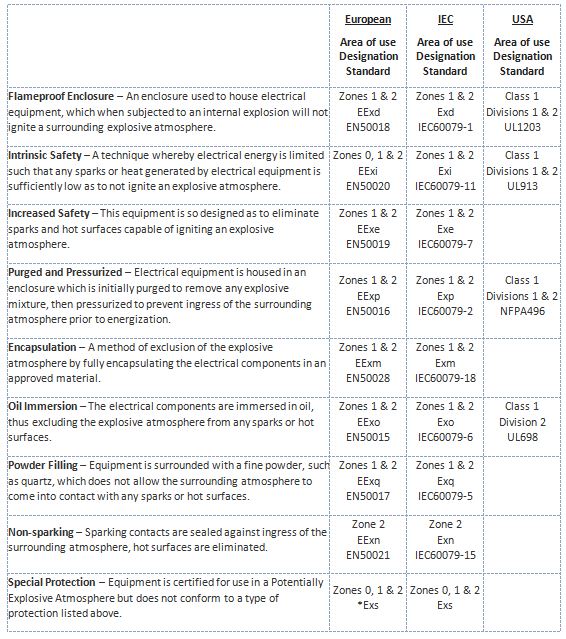 Two numbers indicate the level of ingress protection of an instrument or apparatus. The first is the level of protection against solid objects and the second against liquids.

Difference between a Turbo and Positive Displacement Blower